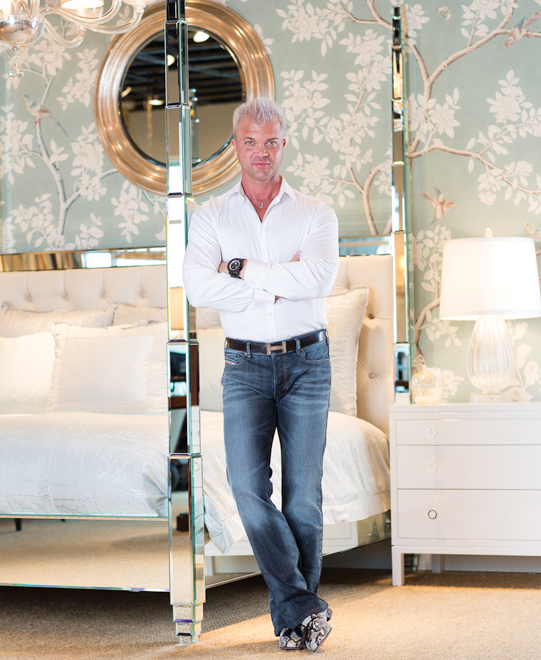 John Hall Nelson, Jr. grew up in Tuscaloosa, Alabama. One of three children, Nelson grew up in a classical French style home surrounded by fine antiques, art, and collectibles. His mother, Phyllis Rogers, recalls her son always drawing and being creative, and sometimes trying to rearrange furniture in the living room. He was inspired by the work of interior decorator Joe McKinnon, most notable a project for his father, Dr. John Hall Nelson. Carefully watching Mr. McKinnon’s use of color, the young Nelson understood that his surrounding and decoration inspired him. He knew from an early age that he either wanted to be an architect or a designer.

Nelson received his Bachelor’s Degree in Interior Design and Business Marking from the University of Alabama, and he began decorating while still in college. When not in the design studio on campus, Nelson worked as an apprentice for prominent local decorators.

After college, Mr. Nelson moved to south Florida to continue his design practice, John Hall Nelson Interiors. His interior projects span from Palm Beach and Miami, Florida to Newport, Rhode Island; including the McKim, Mead and White designed “Carriage House of Beacon Rock” where he oversaw the restoration, renovation, and decoration of the famous Newport property. His work spans across the United States and the Caribbean.

To compliment his interior firm and further his endeavors into the decorative arts, in 2001 Mr. Nelson opened J Nelson, Inc., a design showroom located in DCOTA, Design Center of the Americas in Dania Beach, Florida aptly between Palm Beach and Miami. A premier location for textiles, lighting, and accessories catering to the country’s leading architects and interior designers, J Nelson, Inc. celebrated its 12th anniversary in 2013 with a fete for over 300 guest co-hosted by Mr. Nelson and his friend and fellow designer Mrs. Ann Getty. The showroom has given Nelson the opportunity to hone his skills further by working hand in hand with the likes of John Saladino, Craig Wright, Erika Brunson, Nancy Corzine, among others. J Nelson, Inc. opened a second location in Atlanta, Georgia in 2007, and has representation in New York City, Los Angeles, and Dallas.

John Nelson’s influences span from the very classical Sister Parish and Albert Hadley to the colorful world of Tom Brett. He also appreciates mid-century modern and contemporary design. He is an avid collector of figurative artwork, especially drawings.

Mr. Nelson actively supports the design community. He has participated in the Palm Beach Chapter of the American Red Cross’ Decorator Showhouse for three years and the Atlanta Symphony Orchestra Decorator Christmas Showcase. He has hosted events ranging from lectures to luncheons with leading architects and interior design professionals from throughout the United States and Europe. Mr. Nelson is a member of the Newport Preservation Society and has a keen interest in historical architectural restoration.